has to do with the two extreme states of the good of order: The Tower of Able, where there is a common appreciative system, and the Tower of Babel, where there is not (Philip McShane's Towers). An appreciative system is a world view bounded by an horizon that differentiates between the known-known, the unknown-know, and the unknown-unknown. These worlds mediated by meaning are constructed from a series of concepts that themselves are subject to the state of the authenticity of the person who holds them. Common sense bias adds to the fragmentation of meaning; cosmopolis reverses this progress of disintegration. Collapse follows when the major institutions of the day can no longer cope with either the internal or external problems they face. Fascism (national socialism) is an attempt to form an artificial consensus through the use of force that, since it cannot include the whole realm of human thinking, can only use a truncated world mediated by meaning with its inevitable encounter with "unexpected events."

presents four key elements of these processes, highlighting the need for objectifying one's own realm of interiority (Lonergan's transcendental method) and developing a deep historical consciousness that puts contemporary events into a far wider stream of human geographically conditioned historical affairs. Both are a response to the major exigences of our times, where clear discernment between positions and counter-positions as well as an historical consciousness that takes into account the myriad attempts over thousands of years of many individuals and groups to rationalize their own rise to power.

deals with the cosmopolis task of getting something into print, video, etc.--satire?--where cultural norms can be stretched beyond current boundaries to include theological, philosophical, and other realms of meaning. It outlines a general meta-level story line, identifying key decision points, tasks, and rationality for producing something like a graphic novel. This relates to the actual output of an emergent cosmopolis group that enables one or more of its members to do this type of creative work.

A Cosmopolis Institute: The Path 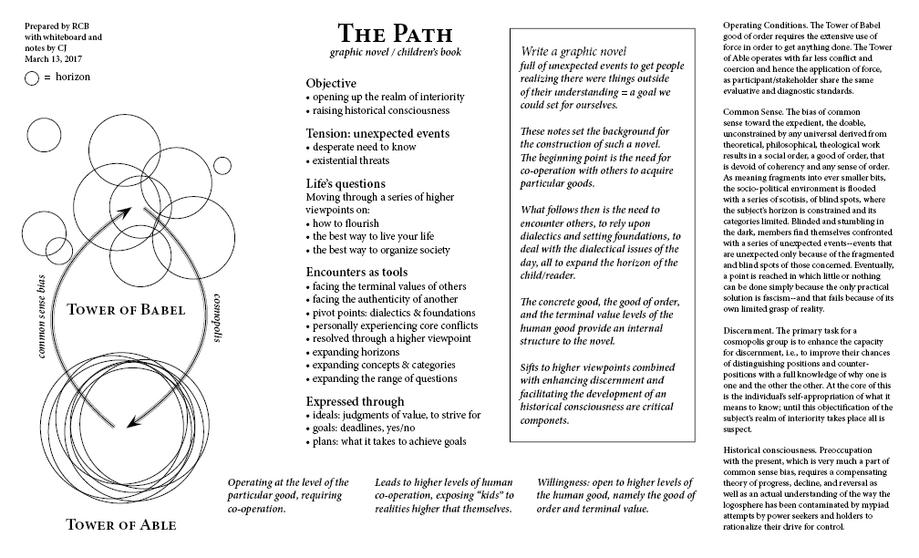