By our very nature, we have no choice about wanting to understand.

Control over language is one essential component of any such cosmopolis group, otherwise different epistemologies, different horizons, different intentions, multiple biases, and the presence of undifferientiated minds all lead to confusion and fragmentation--not cumulative and progressive change in one's thinking.

We developed a schematic which lays out the essential categories and relationships for creating and maintaining a common framework. Based on Lonergan's work, it consists of four strata with the lower levels providing the context for the emergence of higher stratum. They are from top down:

Emergent probability anticipates what there is to be learned in any unique time-and-space-specific socio-political situation. This is a world view grounded in the empirical sciences, a perspective on world processes that takes into account both the regular laws of the universe as well as the statistical probability associated with the laws. It lays out recurring schemes of operations that have a probability of emergence and once emergent a probability of being sustained over periods of time. Lower levels of intelligibility condition the emergence of higher level schemes, while high level schemes provide lower level schemes with non-random patterns of regularity.

This level restores the subject to the center of the equation by detailing the way that human beings come to understand themselves and the world around them.. Lonergan's transcendental method or generalized empirical method provides the grounds for a true transdisciplinary approach to learning. The dynamics operate on and in the world view of emergent probability.

The newt stratum up sets the context for the operations and activities of the subject by outlining the playing field as human beings seek the god or pursue evil. It provides a scheme for understanding the full range of progress and decline at various levels of the human good including social dimensions as well as the actualizing of individual potential at each level.

The top stratum provides a structure of understanding human life-cycles. It illustrates the various ways a person can actualize his or her potential when operating at any of the three primary levels of the human good/evil.

Cosmopolis work concentrates at the third level of the human good dealing with reflective understanding. This is where individuals come together to enhance their potential for freedom and liberty through a process of mutual self-mediation in the free encounter with the orientation and values of others engaged in a common goal of deciding that which is of true value. This work forms a loop in the Schematic, a recurring scheme that has no actually starting point. For our purposes, we start with the individual's actualizing of his or her potential for freedom and liberty through intellectual, moral, and religious conversion. Such reflective people then joint together in highly personal non-institutional relationships who because of who they are engage in resolving conflicts and working out what is truly of value. This determination affects the good of order in the civilization or culture of which they are a part in a process of evaluation and critique, sorting out what works from what needs to be improved. Such changes then reflect back on the individual's own life and sets the conditions for improving the subject's orientation. 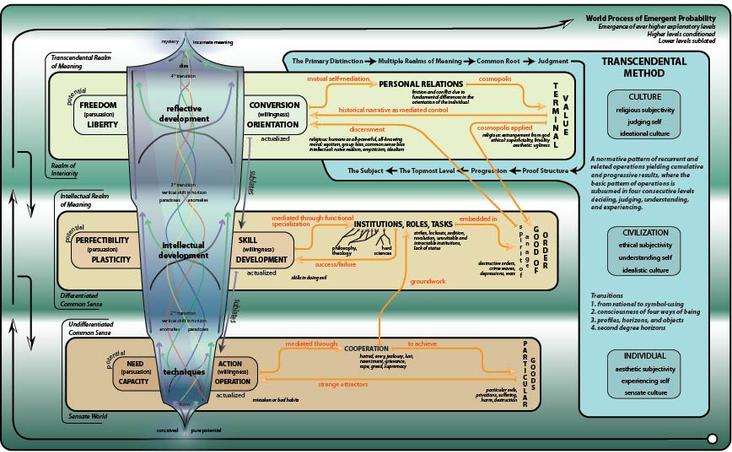