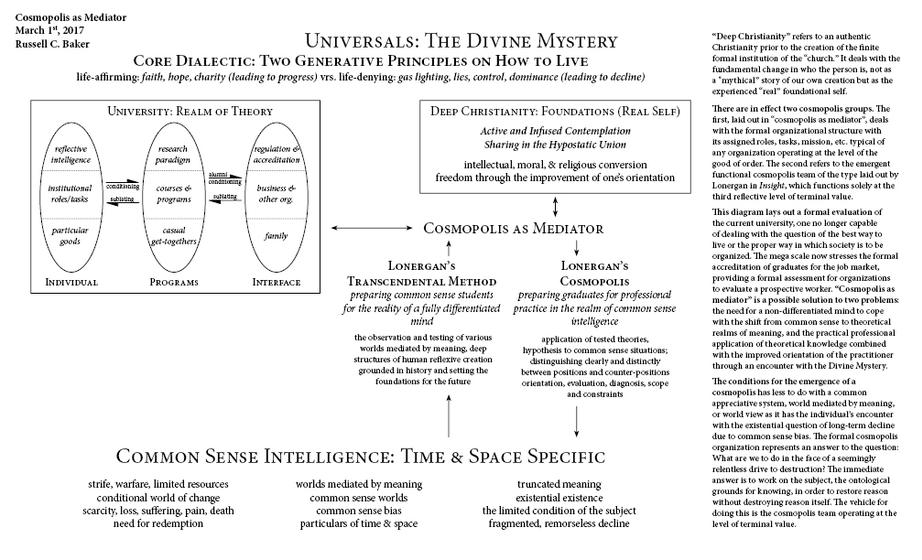 The following diagram emerged from an exercise in determining the conditioning factors for a university.  The central box encodes the core recurring schemes outlined in the previous diagram. There are several points of interest.

The university is defined as a place where people come together to explore the realm of theory in a variety of different disciplines. This stands in contrast to the general world of common sense within which the university exists. What universities have to offer is a differentiated mind that incorporates both common sense and theoretical realms of meaning. No longer is it possible for a university to play the broad educational role for living that it once did; a new defining role needs to be found--and this is our proposal.

The university also exists within a tension between the finite world of human particulars and the transcendental world of the Divine Mystery. The problem here is that the proportionate understanding of finite creatures is grounded in an experiential world of scarcity, loss, pain, and death while the world of the Divine Mystery is transcends human reality to bring in a world of deep Christianity where timeless universals of love and joy are built upon the foundation of the hypostatic union and the Mystical Body of Christ. Here, death and scarcity, limited resources and strife, have no meaning.

The ultimate criteria for assessing the university lie in the ongoing dialectic: a life-affirming Divine Mystery or a death-seeking "Satanic" generative principles. Both are considered within the realm of theory rather than common sense, and refer to specific recurring schemes of operations that end in one of two ways: life or death both physical and spiritual. It is the difference from being open to life as it is, or attempting to dominate or control the world  according to one's own desires and wishes.

A Cosmopolis Center can play a critical role as a mediator between the theoretical world of the university and the practical world of common sense in two distinct ways. First of all, it can help people of common sense entering the theoretical world of the university to make sense of the transition, clarifying both boundaries and intentions by helping the individual appropriate his or her coming to know. Here Lonergan's transcendental method is the key tool. Secondly, it can help theoretically trained people to engage in the reality of common sense society. Here the emphasis is on cosmopolis itself as we have come to understand it, with a special emphasis on a design mentality of individual and group problem solving, on a structure methodology for professional practice, and on the formation of and participation in an emergent cosmopolis team. The institute does so through an ambition to create a body of scholars intent on working within the functional specialty of dialectic.

Positioning a Cosmopolis Center in the Greater Scheme of Things