The Recurring Schemes of Operations

This project in understanding university life started as a training exercise for the group to appropriate Lonergan's world view of emergent probability. But like any training exercise in which we engage, the overall question of realizing Lonergan's notion of cosmopolis is always there.

There are two substantive developments in meeting the latter question. The first is a better understanding of university life as a set of three levels of intelligibility laid out in the following chart. At the core are those interested in leading a life of the mind. The next step up lies in the free association of such people to not only engage in such work but to make a living doing so. The higher level consists of the variety of recurring schemes necessary to meet society's demands, not only as source of students but as a formal legal system of accreditation and funding.

The second specifically defines the university as operating in the realm of theory in a world where the vast majority live in the world of common sense. This orientation  provides a unity of purpose behind the sciences, reflective philosophy and theology, the theoretical development of the professions, the liberal arts program of the mind, and even the non-verbal explorations and speculations of the arts. In short, the university offers people of common sense intelligence the possibility of developing a differentiated mind by opening up the realm of theory.

This places cosmopolis in a particular interface role. First of all, Lonergan's transcendental method provides a way for common sense people to not only understand but to place into a common perspective the multiple avenues of theoretical research. Secondly, a cosmopolis center provides university graduates with a means of engage in the world beyond that of their specific disciplines. It represents an exercise in the functional specialty of Dialectec. Details to follow. 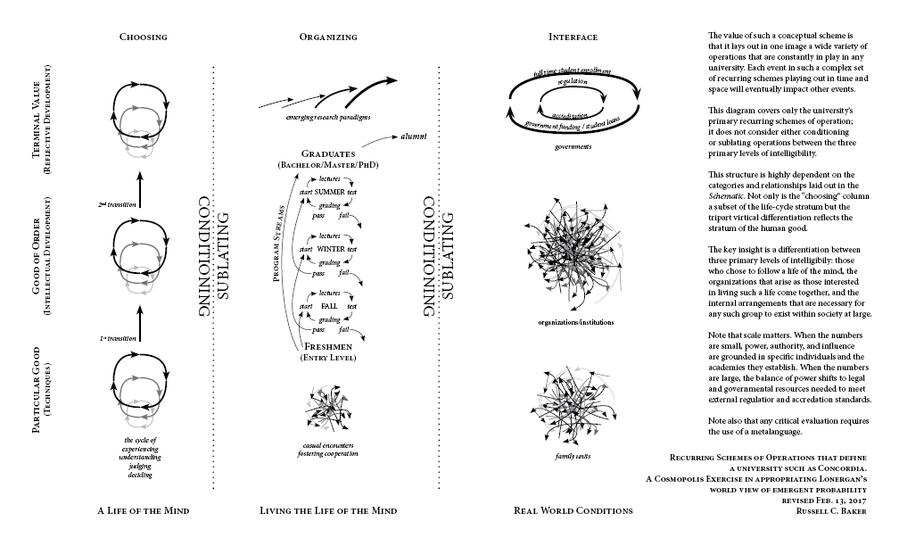