So What? Why Study These Variables?

This section lays out nine different reasons for mastering these sixteen transdisciplinary variables drawn from the social sciences as essential features of any professional practice in a cosmopolis context.

Notes on Fundamental Institutional Changes in the US

A brief comment on the Frankfurt School's Critical Theory, the Gramscian long march through the institutions leading to an inbred elite, and the rise of the deep state and/or administrative state.

Reflections on the Nature of Politics

Fighting with a naked blade; foundational stances and the positions and counter-positions they generate, and the reflective 3rd level intelligence over the decision concerning terminal value.

Novel "Case Study": Laying out an Exercise in Imaginative Play

Using these variables to understand the conflicts and co-operations among members of a medical team that find themselves trapped in a failed state war zone.

Today we blocked out the essential characters of our little drama: three mountain figures (Bellwether, Perd, & Herb), two warriors (T-Dog & Chall), two members of the New Christian movement (Pree & ProPost), and three members of the Med+ team (Doc, R.N., & Chap). With this we added a series of basic character and personality types--including the basic categories of the Enneagram.

We also determined the nature of the crisis that is tearing JesusLand apart. It's an existential distress that has spread throughout the area, affecting all four "communities." 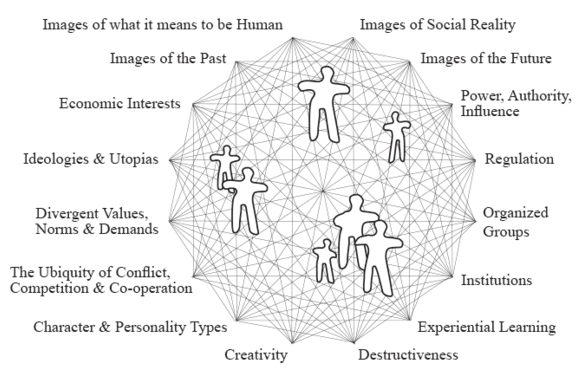 When Pard stumbles across an empty high-tech tomb whose existence seems more magic than science all hell is released: for the first time the traditional societies that inhabit JesusLand face with a reality that transcends their own culture. The existential distress manifests itself in the mountain clans and soon spreads to the New Christian city. It is the Med+ team that is potentially capable of understanding and objectifying the existential reality of the Bellwether, the first person to live within the realities of a new dynamic and intentional self. The result is not a return to the familiar traditional ways, but i shift to a new more dynamic understanding of history now controlled by method.

This week we started the learning exercise in appropriating the transdisciplinary variables via blocking out a novel. This opening exercise provides a map of the terriroty, sketches out both the general history and geographical situation, and takes an initial stab at identifying the primary stakeholders and participants in this time-and-space-specific socio-political context. The region has been named "Jesus-Land" by a sect of Christians seeking sanctuary after a post-Western apocalypse--silly I know, yet this is the scenario created by the team.